When I was a new believer in Christ (Nov 1989), I was thinking that I'm fated for Christianity like some other fellow Christians but there are also others who are fated for their own respective religions. TO EACH HIS OWN! Therefore I was very reluctant to share my Christian testimony with non Christians. Why offend people? Why go and invite trouble ?
Then I'd this vivid dream (1990):-
In the dream, I was driving my car along Tebrau Highway from my office where I worked as a manager in a financial institution.(my office was directly overlooking an open field which is today’s Pelangi Plaza) passing "Christine Place", a restaurant serving up some good "Dim Sum" back in those days on my right toward Singapore immigration check point along Jalan Tun Abdul Razak with the old Johor Bahru main train station on the left and Merlin Tower on the right. 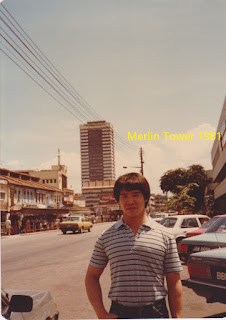 Merlin Tower was then the tallest building in Johor Bahru if I am not mistaken. It was at about this point near Merlin Tower that I noticed something most strange and bewildering was happening. There were cars that began to overtake me both on my left and on my right, quite understandably because I’m a well known slow “turtle” driver. But the big surprise was that these were no ordinary cars.They were all crushed, badly mangled up cars, some have even lost their wheels but could still zoom pass me all the same. The most grotesque and hair raising part was that they were no ordinary drivers! All these drivers were also all crushed, badly mutilated and disfigured. I could even see one with his eye ball dangling outside his eye socket. They were dead drivers!

It was so nauseating, horrifying and terrifying! 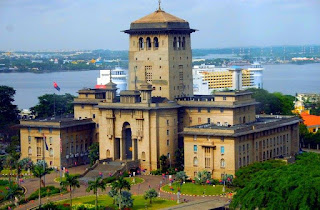 All too soon we found ourselves standing in a long queue at the front of the entrance of the Sultan Ibrahim building which houses all the government offices then. I'm not sure if the department which issues death certificates is also located in that building. We were taking our turn to enter that building after a brief inspection by two female workers who were dressed in full white gowns. After I walked into the building, the two workers kept looking at my feet as if something had gone wrong. However I was “permitted” to continue.

Soon, I found myself alone inside a large room or an auditorium I was not sure because the light was very dim. Somehow instantly and instinctively I sensed that it was more like a court room where judgements and verdicts are being pronounced. Sure enough, I began to see different objects of worship, one after another, started to protrude out of the wall in front of me and I could clearly identify them because they were all images of popular religions that have been followed according to our traditions.

I was shocked to the bones for it was judgement time!

I was wrestling within myself arguing that surely I should not be judged here because I have already been redeemed and saved by the blood of Jesus Christ and I'm a righteous son of the living God through faith in Jesus Christ. But who am I to argue?

Suddenly, as I thought I was alone at the front of that court room, I was wrong! I turned and looked behind me and to my utter surprise the whole room was packed with women - middle aged and older women! Now, I can never and will never forget in my life, the weary look on each of their faces. Until this day the utter desperate look in their eyes still pains & cuts & moves my heart deeply.

First, it was the look of extreme sadness and remorse. I could tell all of them were honest god loving people and kind hearted believers of their own respective religions/gods according to their traditions. All of them realized now that they have got the wrong gods/religions and it was too late for them now. They are dead and could only wait for the impending judgement. They realized not one of their man made religions can rescue them now. How they wish they had come to know Jesus Christ, the way, the truth and the life.

You have to be there with me to feel how sorry they were, their feeling of utmost regret absolutely overwhelmed me. All of them know they will be sent to hell for a season before the ultimate lake of fire for all eternity.

Second, it was the look of utter desperation and hope. Even without a word spoken, I could read their minds what they were eagerly trying to communicate with me. They wanted me to do something for them, if only just one thing. Every one of them, without exception, was urging me, pleading with me, begging me to go and tell about the saving grace of God, the redemption plan of God, the atoning blood of Jesus Christ, the cross of Calvary to their love ones who are still alive.

I was then only a very new Christian, barely a couple of months in the Lord. So I began to reason with them, how could I take upon me such heavy load of responsibility. But, you just could not stop sensing that unmistakable, unceasing yearning from their look. They were casting all their hope on me!

As I was still trying to convince them of my inability, all of a sudden, the two workers in white gowns entered the auditorium and called me out. They said "look what you are wearing, you should not be here, you must go out now!".

And I woke up!

I know at the King's court, God has given me a mission to fulfill, to go and carry the message of Salvation only available in Christ - to warn people not to go to the place of judgement. 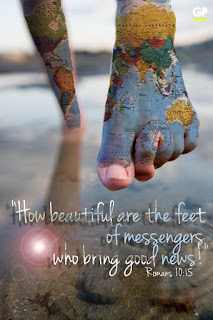 Just as He loves me so much Jesus Christ has gracefully come to rescue me in my darkest hours, He loves all the people just as much and He wants all to be saved and none should perish in the lake of fire, a place He has prepared for Satan and his demonic cahoots. He provides us with the one and only way out, through faith in His only begotten son, Jesus Christ, who took our sins upon himself, who cleansed our sins with his blood, who made us righteous and accepted before God and who gave us a new life in Him, a life of love, joy and peace.

Now, each time I contemplate not to share the good news of salvation, the looks from those women in the dream would overwhelm me time and again because I matter to the eternal destiny of their children. So God help me please! Amen!

John 14:6Jesus answered, “I am the way and the truth and the life. No one comes to the Father (God not the Pope) except through me".Acts 4:12Salvation is found in no one else, for there is no other name ( Jesus Christ) under heaven given to mankind by which we must be saved.”1 Timothy 2:5For there is one God and one mediator between God and mankind, the man Christ Jesus.Romans 10:15And how shall they preach unless they are sent? As it is written: “How beautiful are the feet of them that preach the Gospel of peace, and bring glad tidings of good things!”Hebrews 9:27And as it is appointed unto men once to die, but after this the judgment.John 3:16For God so loved the world that he gave his one and only Son, that whoever believes in him shall not perish but have eternal life.
Posted by CP Waterman at 8:15 AM No comments: Links to this post